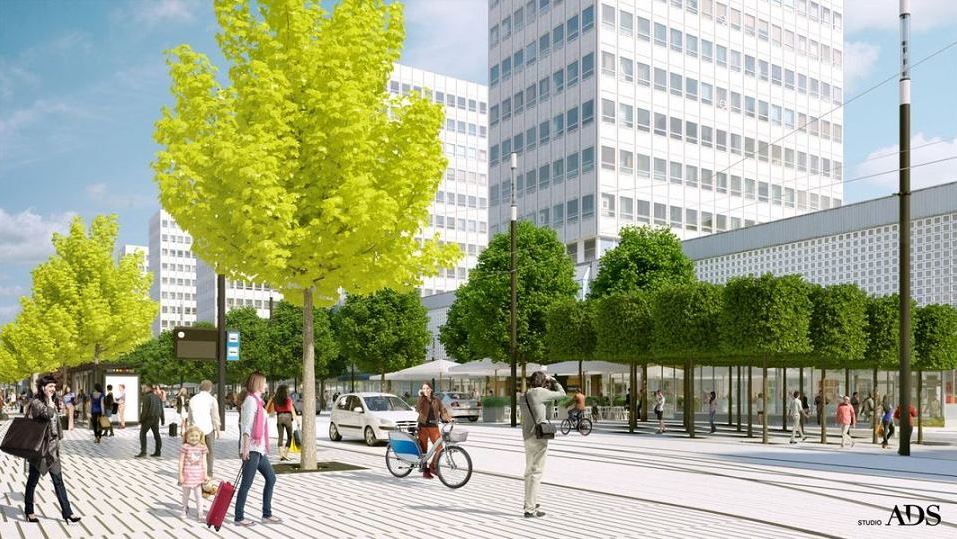 “Municipal Revitalisation Programme for the City of Poznań”

In 2017, “Municipal Revitalisation Programme for the City of Poznań” was developed. The document defines the directions of revitalisation measures and makes it possible to apply for EU funds. The development of the Programme was preceded by a great deal of actions, including meetings with residents’ associations and administrative bodies of housing estates, a call for external projects, preparation of an environmental impact forecast and public consultations. As a result of these measures, the Poznań City Council adopted in 2017 a resolution on the adoption of the “Municipal Revitalisation Programme for the City of Poznań” (Resolution No. LVI/1021/VII/2017 of the Poznań City Council of 7 November 2017).

This programme was developed in accordance with the provisions of the Revitalisation Act and the requirements contained in the Guidelines of the Ministry of Development with respect to revitalisation in operational programmes for 2014-2020, which makes it possible to seek funds for revitalisation projects from EU funds, i.e. Wielkopolska Regional Operational Programme for 2014-2020.

The programme is a continuation of the previous editions of the Municipal Revitalisation Programme and provides for 14 planned undertakings including 95 revitalisation projects to be carried out mainly in Śródmieście and, in a few cases, in areas directly adjacent to it. The programme was developed based on extensive public consultations, conducted in accordance with the Revitalisation Act, to get to know the residents’ expectations. After the implementation of the Municipal Revitalisation Programme for the City of Poznań, Śródmieście is to become an evenly developed district, shaped by a robust civil society, which is the best place to live, work, study, run a business, develop culture and relax. The main strategic objectives include:

The implementation of the objectives, undertakings and revitalisation projects provided for in the Municipal Revitalisation Programme for the City of Poznań should minimise the problems faced by the city and its residents and allow it to become an attractive and competitive place on the national and international scales.

In the period preceding the adoption of the Municipal Revitalisation Programme for the City of Poznań, the revitalisation process was carried out in accordance with the Integrated Programme for Renewal and Development of Śródmieście in Poznań for 2014-2030. The Programme for Śródmieście promoted integration of measures carried out in the centre of Poznań to protect and develop its most important assets. As part of the programme, projects for the renewal of the very centre of the city were continued in 2017.

Programme for the City Centre – Stage 1

As part of the project, it is planned to reconstruct the public transport infrastructure and calm car traffic in the city centre through, among others:

Within the remaining scopes of the project, the agreed multi-branch concept was completed and accepted with respect to the following streets: Święty Marcin, Gwarna, Fredry, Mielżyńskiego, 27 Grudnia, Wolności Square, Al. Marcinkowskiego, Ratajczaka, Kantaka, Al. Niepodległości, Towarowa. Based on the concept, a building permit design will be prepared for the next scope of works. Work related to the preparation of a building permit and detailed design was also started for “Reconstruction of Święty Marcin Street on a section from Uniwersytecki bridge to Al. Niepodległości Street, including the intersection of Al. Niepodległości Street with Towarowa Street”.

Programme for the City Centre – Stage 2

The next stage of the works, worth PLN 130 million, includes the construction of a tram route with the calming of car traffic in Ratajczaka Street. The programme received co-financing from EU funds in the amount of PLN 59.1 million. The works carried out in 2017 were related to the orientation of further works under the project, by updating the study.
Ultimately, the project includes:

Restoration of the Łazarski Market Square

In 2017, an agreement was concluded with the Architectural Studio of Jacek Bułat, the winner of the competition for the concept of Łazarski Market Square Restoration. The competition was conducted in accordance with the Flemish Open Call procedure. The agreement provides for preparation of a building permit design along with a detailed design, and construction works will commence in the second half of 2018. In the winning concept, the marketplace was designed on a circular plan with a transparent membrane roof. The architects designed also additional commercial space intended for occasional fairs. Convenient access to the buildings and the marketplace is to be provided by a two-way street around the market square. The residents will have wider pavements and greenery in front of the entrances to the buildings, as well as a place for rest and recreation.

Measures related to the restoration of the former tram depot in Madalińskiego Street, through social and cultural activities under the slogan “Summer in Madalina”, were continued. After closing down the tram depot in 2014, its area and facilities located there were ordered and adapted to host cultural and social activities organised by the “Wildzianie” Association, the Wilda Housing Estate and the Railway Vehicle Enthusiasts’ Club.

The project has been initiated by city councillors and is implemented as a pilot edition of the Local Neighbourhood Initiatives project. The aim of the project is to support and encourage the residents to actively create and participate in social events that shape the identity of a given neighbourhood. Each resident of Łazarz, Wilda or the Old Town could submit a proposal – a concept for the implementation of a project or organisation of an event in their housing estate. In total, local initiatives for the amount of PLN 190,000 were implemented in the area of three neighbourhoods.

The 5th edition of Days of the Poznań Fortress

In 2017, as part of the Programme for Śródmieście, actions were also taken to support local communities, both in financial and organisation terms, through the following events and initiatives:

Improvement in the quality of public space

Numerous projects were implemented in Poznań to improve the quality of public space. In cooperation with representatives of the local community (the Ostrów Tumski-Śródka-Zawady-Komandoria Neighbourhood and the “Śródeja” Association) and the City, the temporary development of the square at Śródka Roundabout was completed. The work consisted in modernisation and laying a new surface, planting greenery and introducing small architecture elements. Students of the Interior Design Architecture and Scenography and the Faculty of Architecture and Design at the University of Arts in Poznań, as well as the Faculty of Architecture at the Poznań University of Technology developed designs regarding the development of Śródka. The students’ works were on display during the opening of the restored area at Śródka Roundabout. As part of the revitalization measures undertaken in Śródka, the façade of St. Kazimierz church in Bydgoska Street was provided with lightning by the partnership between the Council of the Ostrów Tumski-Śródka-Zawady-Komandoria Neighbourhood and the “Śródeja” Association.

Christmas illuminations that decorated downtown streets and squares in Poznań in 2017 were designed in such a way as to emphasise the historic character of the space and reflect the spirit of these places. Many new elements were created, such as a gate to the Collegiate Church of St. Mary Magdalene in Kolegiacki Square, figures of the first Polish rulers in front of the Cathedral, crowns of kings, Saint Martin ahorseback in Mickiewicz Square and a span of the former Chwaliszewski bridge. The streets around the Old Market were also illuminated, and the fountains were provided with new lighting in the form of light portals inspired by the arcades of the town hall.

Competition for the concept of revalorization of Kolegiacki Square in Poznań

In 2016, the results of the competition for the concept of revalorisation of Kolegiacki Square in Poznań were announced and an agreement was signed with “Urbantech” design studio – the winner of the competition. In 2017, archaeological research and design works were continued to ensure the best exposure of archaeological relics. Construction works are planned to be launched in the second half of 2018 and to be completed at the end of 2019. After the reconstruction, Kolegiacki Square will gain a completely new dimension. It will become a public square and a pedestrian zone. The barriers that currently divide this space into several parts will disappear. The transportation system in the form of a road will be preserved only on the southern side of the square – the remaining space will be available for pedestrians without restrictions.

The project of revitalisation and protection of the cultural heritage of the historic Dzieciniec pod Słońcem complex in Poznań is aimed at adapting it to the needs of the Youth Culture Center. As a result of the project implementation, new spaces will be introduced to the existing interiors of the buildings which will be adapted to the cultural activities carried out in the complex.

In 2017, numerous changes in the city centre were introduced also as regards transport solutions. Traffic lights were successively switched off to optimise traffic and the safety of pedestrians and cyclists. New bicycle routes and Viennese stops were also provided.

Measures carried out under the “Renovation of parks in the city centre” programme included continuation of the modernisation of the paths in the Cytadela Park and the renovation of the stairs on the Przemysł’s Hill. Green areas in the K. Marcinkowski park were also renewed. As for green areas in other regions of the city, 1,300 shrubs were planted in the Górczyński Park, and the development of the Rataje Park was continued using EU funds. In the latter, a neglected, disordered area, partly a wasteland, is undergoing regeneration. In 2017, 216 trees and 2.5 thousand shrubs were planted there and the city gained 3,800 m2 of new park alleys and 2,000 m2 of new bicycle paths. A fountain was also built and 45 benches and bicycle stands, as well as pergolas, protective barriers and wooden deck chairs were fixed.

Since 2011, the City of Poznań has been building Wartostrada – a pedestrian and bicycle path. The project will make the areas along the Warta River more attractive and will increase accessibility to them while revitalising the river. In recent years, the construction of Wartostrada has been carried out using funds under the Wielkopolska Regional Operational Programme for 2014-2020. Works completed in 2017 include construction works on the section between Cybina and Królowa Jadwiga bridge.

On the Warta River there were three City Beaches, provided with infrastructure and beach equipment such as: beach baskets, solar showers and a Jacuzzi. Each of these beaches had a different profile, offering its own cultural and entertainment programme, specific to the place. The beach in Chwaliszewo was organised for the first time on the lower terrace of the Warta River, while the Wilda beach offered a multipurpose field. On the Wilda beach the City of Poznań organised a Jacuzzi area, while on the Szeląg beach sunbathers could use a Jacuzzi area and barbecue ones.

Another edition of the “Friendly yard” programme, dedicated to development of municipal yards, was implemented. The aim of the programme is to improve the technical and functional conditions of the surroundings of residential buildings administered by housing communities in the city centre, with particular emphasis on the creation of permanent elements of infrastructure, rest areas and playgrounds. The programme was co-financed by the City of Poznań and housing communities. In 2017, the development of six yards, located on 23 Lutego, Chłapowskiego, Działyńskiego, Kossaka, Małeckiego and Reja Streets, was co-financed. The works included construction of surface, drainage and a playground and provision of rubbish boxes, bike racks and plants.

City beaches – in barbecue areas, each resident could picnic over the river, i.e. legally barbecue and rest and eat, or play table tennis. The lower terrace of the Warta River between the Rocha Bridge and the Chrobry Bridge was temporarily lit up to make residents feel safer while spending their free time on the Warta River. As part of the city beaches project the City cooperates with the following neighbourhoods: Stare Miasto, Winogrady, Wilda, as well as the Municipal Green Areas Authority

For the completion of the Stare Koryto Warty Park, the City of Poznań was awarded by the Society of Polish Urban Planners for the best-developed public space in Wielkopolska.